Great to see others reporting on the Transhumanist agenda. We are all synthetic humans now due to the submicronic nanoparticulate matter being aerosol sprayed from geoengineering, ingested, inhaled and all covered with this crap.  This technology have been in commercial use for over ten years. The military has had this technology for decades. Another huge reason that Geoengineering must be halted now!

The Agenda and You ~ Part III; Transhumanism and You in the Age of Transitions

How Smart Dust Could Spy On Your Brain
http://www.technologyreview.com/view/…

Over a mere two decades, the Pentagon lost track of a mind-numbing $10 trillion — that’s trillion, with a fat, taxpayer-funded “T” — and no one, not even the Department of Defense, really knows where it went or on what it was spent. Even though audits of all federal agencies became mandatory in 1996, the Pentagon has apparently made itself an exception, and — fully 20 years later — stands obstinately orotund in never having complied.

The Pentagon has never been audited. That’s astonishing
March 20, 2017, The Guardian (One of the UK’s leading newspapers)
https://www.theguardian.com/commentisfree/2017/mar/20/pentagon-never-audited…

On Thursday, Donald Trump released a preliminary budget proposal that calls for a $52bn increase in military spending. But just last December, a Washington Post investigation found that the Pentagon had buried a report that outlines $125bn in waste at the Department of Defense. Although it’s required to by law, the DoD has never had an audit, something every American person, every company and every other government agency is subject to. The result is an astounding $10tn [that $10 trillion!] in taxpayer money that has gone unaccounted for since 1996. “Over the last 20 years, the Pentagon has broken every promise to Congress about when an audit would be completed,” the director of the Audit the Pentagon coalition, Rafael DeGennaro, told the Guardian. “Meanwhile, Congress has more than doubled the Pentagon’s budget.” Legislation in the early 1990s demanded that all government agencies had annual audits, but the Pentagon has exempted itself without consequence for 20 years now. In the meantime, the GAO and Office of the Inspector General (IG) have published an endless stream of reports documenting financial mismanagement: $500m in aid to Yemen lost here, $5.8bn in supplies lost there, $8,000 spent on helicopter gears that really cost $500. During this past election cycle, both the Democratic and Republican platforms called for the Pentagon’s audit. But despite broad support, the issue has remained stagnant in Washington.

Note: When every business in the country and every other branch of government is required to account for every dollar, how can the Pentagon get away with failing to account for literally trillions of dollars year after year? For more along these lines, see concise summaries of deeply revealing military corruption news articles from reliable major media sources.

Pedophilia: Is It The Currency And Kinship Of Elites In Business And Governments?

March 21, 2017, Dr. Phil, the well-known TV show PhD psychologist, took an unprecedented entertainment ‘challenge’ of exposing sex trafficking, pedophilia and pedophile rings while interviewing a life-long ‘sex slave,’ Kendall, who reached out to him for help.

Kendall, who apparently is gravely traumatized by her inhumane experiences of abusive sex, torture, rape and other horrors, bravely did her best to articulate what goes on within the world of human trafficking, sex slavery and pedophilia.

She does not know her exact age, and claims she was conceived specifically for, and given by her biological parents to, the “man who owns her.”  She was given to the man who ‘owns’ her by her birth parents, whom she really doesn’t know. Since when is any human being owned?  Only sickos use that type of descriptive language!

Kendall says often she was kept in a cage barely large enough to hold her body size and it was hung from the ceiling. Sick!

She was first violated before she could talk.  Sicker!

Her ‘owner’ told her she was born to be what she is, and God made her for that purpose, which just goes over the top for me: Posturing Creator God as an accomplice in human crimes.  Sickest!

Her ‘owner’ pimped her to wealthy clients, who paid to abuse her in ways that are incomprehensible to hear, let along understand how inhumane testosterone-livid, wealthy males can, and do, treat babies, children and females.

Kendall’s ‘clients’ included doctors, high profile politicians, judges, law enforcement, prominent and rich members of society … all members of pedophile rings violating innocent children from birth, plus dealing in human trafficking.  If by chance, Kendall would ‘disobey’ her ‘owner’, he would beat her and make her act like a dog, even force her to eat feces.

Are you listening, Child Protective Service, FBI and the U.S. Attorney General?

How can you not investigate these inhumane ‘elite society’ activities that have been rumored to roam the halls of governments globally?

Kendall says she was impregnated numerous times; had many abortions but also gave birth to two sons and a daughter, all of whom were taken away immediately after birth and probably placed into lives as “sex slaves.” That entire Dr Phil Show with Kendall is here.

During the time leading up to the 2016 presidential election, various rumors were surfacing about something labeled “PizzaGate,” which threatened to overtake Washington, DC, but somehow became neutralized.

After that report aired, Ben Swann, a prominent investigative CBS TV reporter in Atlanta, Georgia, has gone missing.  Is he dead or alive?  Who knows?

END_OF_DOCUMENT_TOKEN_TO_BE_REPLACED

Despite Jones’ claim that the reason for the apology is because “we think it is the right thing to do,” it may have more to do with the perceived threat of legal action from Alefantis, who wrote to Jones in February asking for several retractions. The Washington Post‘s Paul Farhi explains:

“Under Texas law, the Austin-based Jones had to retract or apologize for the stories by Friday — one full month after receiving Alefantis’s letter — to avoid exposing InfoWars to punitive damages in a libel suit.”

It’s rare for Jones to make a public apology. The Infowars website has a correction section. There are only two entries, of which the Comet apology is one.

Brock is still alive, but… Hmm:

Media Matters founder David Brock has suffered a heart attack but is expected to make a “swift recovery,” a senior aide said Wednesday.

“He was quickly transported to a local hospital, received prompt medical treatment, and we are looking forward to a swift recovery.”

“We thank everyone for their well wishes, and especially want to thank the wonderful doctors and staff who treated David. We kindly ask for privacy as he recovers,” the statement added.

Brock, 54, a staunch supporter of Hillary Clinton during the 2016 presidential campaign, founded the nonprofit liberal media watchdog publication Media Matters for America in 2004.

JAMES ALEFANTIS IS A ROTHSCHILD, HE WAS THE BOYFRIEND OF DAVID BROCK OF MEDIA MATTERS WHO IS NOW UNDER HEAVY INVESTIGATION AND IS THE ONLY LINK TO ALEFANTIS

ROTHSCHILDS ARE GOING TO CLEAN UP MEDIA MATTERS IN A GIANT FIRE, BROCK TO BE FOUND DEAD OF A HEART ATTACK LATER

“Leaders of the free world”??? or stooges for the Roman Catholic Jesuits!?! You decide.

Note how all play-ah’s have to dress in drag to stay in power, be in Hollywood, etc.

“fabricate, devise,” 1690s, from trump “deceive, cheat” (1510s), from Middle English trumpen (late 14c.), from Old French tromper “to deceive,” of uncertain origin. Apparently from se tromper de “to mock,” from Old French tromper “to blow a trumpet.” Brachet explains this as “to play the horn, alluding to quacks and mountebanks, who attracted the public by blowing a horn, and then cheated them into buying ….” The Hindley Old French dictionary has baillier la trompe “blow the trumpet” as “act the fool,” and Donkin connects it rather to trombe “waterspout,” on the notion of turning (someone) around. Connection with triumph also has been proposed. Related: Trumped; trumping. Trumped up “false, concocted” first recorded 1728.

Last card played in bridge is the “Trump” card

“playing card of a suit ranking above others,” 1520s, alteration of triumph (n.), which also was the name of a card game.

President Trump; 666 and The Beast 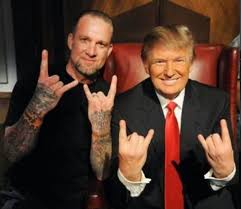 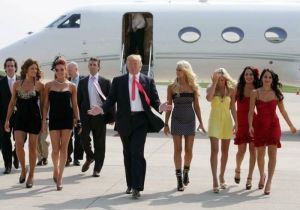 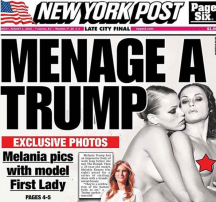 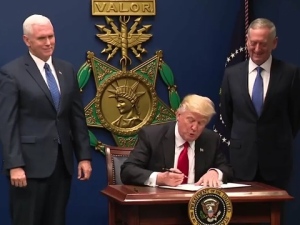 Note Medal of Valor is with Satanic star upside down! 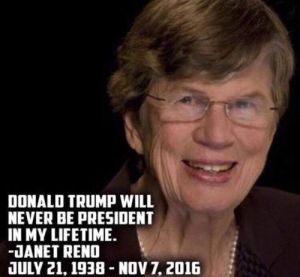 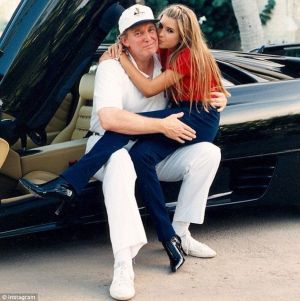 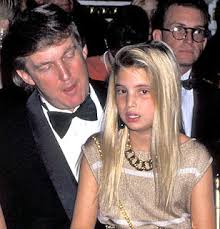 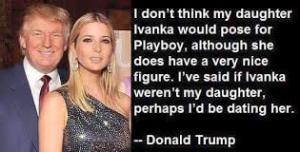 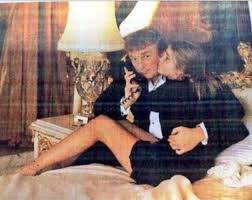 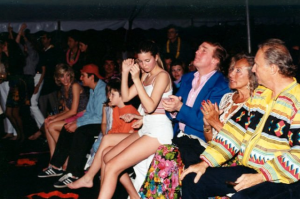 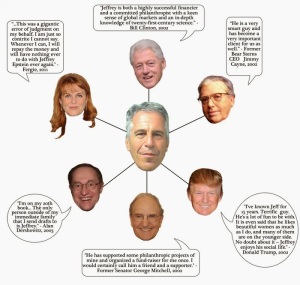 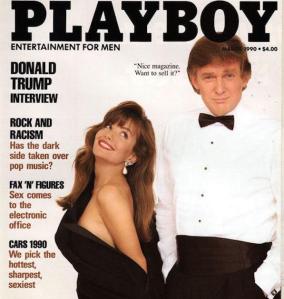 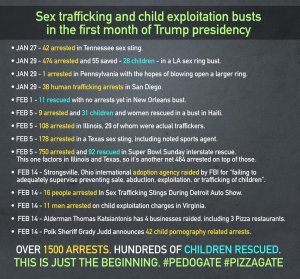 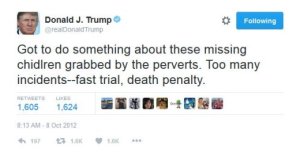 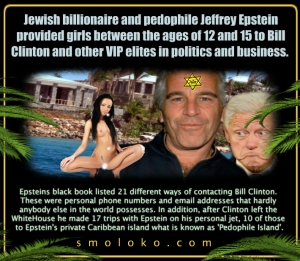 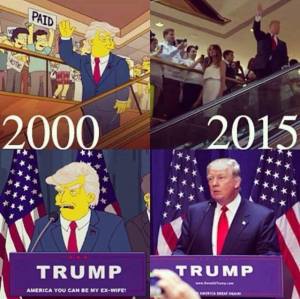 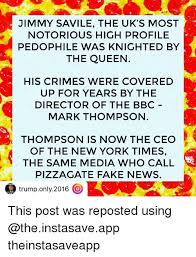 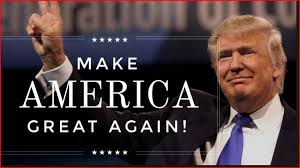 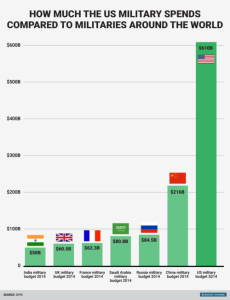 Trump vowed last Thursday to make a major tax announcement over the next few weeks, adding fuel to a rally that had stalled amid worries about the potential impact of his protectionist trade stance and a lack of clarity about other policy reforms. 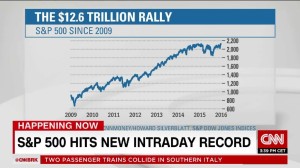 “Day after day, corporate executives from a variety of industries are being brought to the White House to consult with the president. Business does seem to be back in the driver’s seat, and I think that’s why people are willing to pay up a little bit more for stocks,” said Jamie Cox, managing partner of Harris Financial Group in Richmond, Virginia.

How We Got Here In One Sentence