In order to get a perspective on sane and rational vaccine policy, we must again turn away from the U.S. corporate media and their primary advertising sponsors, the pharmaceutical industry. The flu vaccine is, by far, the most prosperous vaccine produced and sold in the U.S., with over 300 million doses produced annually. It is also the leading vaccine, by far, injuring and killing people as evidenced by the quarterly Department of Justice (DOJ) reports of vaccine injury and death compensations by the Vaccine Court.
In the U.S., one cannot sue a pharmaceutical company for injuries or deaths related to vaccines. By simply reading the U.S. corporate “mainstream” media one is led to believe that all doctors and medical personnel support mass flu vaccination, and believe all medical staff should be forced to receive the flu vaccine every year. But such is not the case. As we have reported over the past several years, many doctors and nurses nationwide oppose mandatory flu vaccination for medical personnel. There are several lawsuits by individuals and unions nationwide fighting loss of employment due to refusing a flu vaccine. The Jerusalem Post recently reported that Prof. Leonid Eidelman, chairman of the Israel Medical Association and the next president of the World Medical Association, opposes mandatory flu vaccinations for doctors, and he opposes identifying which doctors have been vaccinated for the flu, and which ones have not.
Read More…

State Police Tell Medical Marijuana Patients to Turn in Their Guns Or Be Arrested
by Matt Agorist, January 4, 2018

The state of Pennsylvania has just found themselves a loophole they are going to use to take guns from law-abiding citizens.

It is entirely legal in the state of Pennsylvania to use and possess marijuana so long as the user has a valid issued patient Medical Marijuana Card. Also, there is no law in Pennsylvania that states medical marijuana patients have to turn in their guns. However, the Pennsylvania State Police (PSP) care not about state laws and have issued a statement demanding anyone with a Medical Marijuana Card turn in their guns – or you are in violation of the law – therefore you will be arrested.

While the state of Pennsylvania has no law on the books that forces legal marijuana patients to turn in their guns, the state police are ignoring state’s rights and doubling down on the tyrannical federal law.

This week, the PSP issued a statement on their website informing all medical marijuana patients that refusing to turn in their guns makes them criminals. 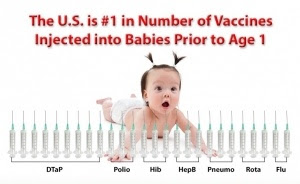 Dr. Theresa Deisher recently granted an interview with the VAXXED team to discuss, among other things, vaccines and autism. Theresa Deisher, Ph.D., is the president of Sound Choice Pharmaceutical Institute (SCPI), a cutting edge biomedical research organization. Dr. Deisher is a genetic engineer with over 20 years experience in the pharmaceutical industry, from basic human biology through clinical trials. Dr. Deisher states in her VAXXED interview that she looked at the rise in autism rates in the U.K. and its link to the MMR vaccine, originally discovered and published by Dr. Andrew Wakefield, and how the medical establishment tried to discredit Dr. Wakefield’s research. She notes that one reason given to try and discredit Dr. Wakefield’s research was that MMR vaccination rates remained steady both prior to and after the spike in autism rates in 1988. However, what she discovered that was not reported was that the manufacturer of the MMR vaccine switched from animal cells to develop cultures to human fetal cells from aborted babies in 1988. So she had one of her Ph.D. researchers investigate the matter more thoroughly, and compare autism rates to the use of human fetal cells in vaccines, and she discovered that every time fetal cells were introduced into the manufacture of vaccines, autism rates increased.