California is parched. The state’s worst drought in decades has left its reservoirs half-naked, if not skeletal. Officials say 17 communities could run out of drinking water this summer; some are considering mandatory rationing; and 500,000 acres in the state may be left fallow. For the first time in its 54-year history, the California State Water Project—the world’s biggest plumbing network and the way millions of state residents get hundreds of billions of gallons of water—is essentially shutting down. In 2012 the project moved 815 billion gallons of fresh water from Northern California’s rivers to 25 million people and a million acres of farmland in the arid central and southern parts of the state. Last year, the driest on record, the system delivered 490 billion gallons, down 40 percent. This year, the planned water distribution is zero.

Two-thirds of California’s 38 million people and most of its $45 billion farm products depend on snowmelt from the Sierra Nevada and Rocky Mountain watersheds, imported via thousands of miles of pipelines, canals, and the Colorado River. Although snowfall is up this winter in the Rockies, precipitation in both mountain watersheds has been going down over the last 14 years, raising scary questions for the nation’s most populous state: What if drought is the new normal? Where will California find the water it needs?

The World Bank joins Nestlé in wanting to privatize water, deeming it “extremist” to suggest that those born on this planet have a natural right to clean, potable water. Meanwhile, RT’s Abby Martin reports that the watchdog group Corporate Accountability International recently released a new analysis showing that:

Investing in private water does not extend access and is also counterproductive for economic development. By contrast, infrastructure investment, abandoned by the corporate sector, is where real benefit can be achieved: the World Health Organization estimates more than $10 of economic benefit from every $1 invested in water infrastructure systems.

Its project database for private participation in infrastructure documents a 34 percent failure rate for all private water and sewerage contracts entered into between 2000 and 2010, compared with a failure rate of just 6 percent for energy, 3 percent for telecommunications and 7 percent for transportation, during the same period.

Whether public or private, water supplies are dwindling. In one shocking report from 2012, the US Defense Intelligence Agency’s Community Assessment of Global Water Security states that the global need for water will exceed the supply by 40% in the next 25 years.

“This means for every 3 people on this planet, there will only be enough water for 2 people,” says Kacper (like the ghost) Postawski. Right now, the three main sources of water in the US are rapidly running dry:

(note that CA gov. has only asked for voluntary cutbacks even though they have known for 3 months there is no water.  They did not declare a Stage I emergency to protect the frackers in the state who would have to cut back as well.)

SAN FRANCISCO (AP) — With summer approaching and California’s snowpack measuring a fraction of normal, state officials said Thursday they will likely order farmers and other big water users to limit the amounts they take from rivers.

The State Water Resources Control Board projected the curtailment letters would be sent out later this month for users on 10 different rivers and their watersheds. It would mark the first such directive since 1977.

Water rights holders were first alerted to the possibility of curtailments in January, when the board sent warning notices.

“When the letters do go out, they’re effective immediately,” said Timothy Moran, a spokesman for the board. “The people who are curtailing have seven days to reply.”

The orders will be delivered first to junior water-rights holders — those who obtained their water rights after 1914 and whose ability to take water ranks behind pre-1914 senior rights holders. Senior holders would still be able to take water initially, and would only be ordered to curtail if conditions became even more extreme.

The rare measure of ordering curtailments comes amid the third year of withering drought in California. The orders could affect supply for large water rights holders, including cities such as Sacramento, farms throughout central and northern California, and other businesses. 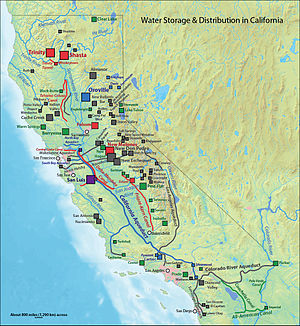 At issue is the proposed “Sites” reservoir just east of Lake County and the Mendocino National Forest, not far from the Central Valley town of Maxwell. The huge lake — five times bigger than Lake Sonoma — would not dam a regional watershed or fishery. Instead, it would hold water diverted from the Sacramento River.

The last major reservoir to be built in California was Diamond Valley near Hemet, which can store 800,000 acre-feet of water and is operated by the Metropolitan Water District of Southern California. Sites would hold 1.9 million acre-feet, making it the seventh largest in the state.

The bill from Garamendi and La Malfa is one of numerous proposals floated by federal lawmakers to address the drought, both through new storage and other measures. Republicans already have pushed through legislation in the House that would authorize construction of other major reservoir projects.

Leading among the scaled-down state alternative measures is a $6.8 billion proposal by Sen. Lois Wolk, D-Davis, whose district includes part of Sonoma County. The bill, which specifically provides just over $1 billion for storage, requires that the public’s interests be served and that those who benefit most from the project — such as farmers and water districts — carry the bulk of the financial load. Specific projects also would require approval of the California Water Commission.

The Garamendi/LaMalfa bill seeks to push the federal money through upon approval of the feasibility study, which is unusual, according to Stork, the Friends of the River official. “It (the bill) breaks all of the rules for water projects, which are not supposed to be pre-authorized by Congress,” he said, and that pre-authorization provision may not survive in the Senate, “which has different rules.”

“Whiskey is for drinking and water is for fighting over.”

This year, water fights are breaking out in private dining rooms and public meeting halls throughout the West. Federal officials have designated drought-stricken parts of 11 western and central states as natural disaster areas. They stretch from Arkansas, Oklahoma, Kansas, Texas, Utah, Colorado, New Mexico and Nevada, to California, Oregon and Hawaii. But few spots are thirstier than the Golden State, where 62 percent of the state is now in an “extreme” drought.

Most of these fights center on how neighbors use, and misuse, the life-sustaining liquid. Some of the quarrels trace back 100 years, to the ugly days of legendary water thief William Mulholland and the hapless Owens Valley farmers. Back then, when the state had 2 million people, politicians and businessmen used “chicanery, subterfuge … and a strategy of lies” to grab more water than they were entitled to. The water grabs continue. But the problem is bigger than it was in Mulholland’s day, as there are now some 38 million Californians who are facing what could be the worst drought in 500 years.

California drought to drive up food prices in the long term

How California Water Agencies Are Responding to Record-Dry Conditions

Rainfall Helps But Does Little to Quench California Drought

How Bad Is California’s Drought? This Bad

Must Read: State of the Farm and Water Report for California; “It’s Just Not There.”