According to Rudolf Steiner, we have a devil on each shoulder, and the angel or Christ is within our hearts.

Christ between Lucifer and Ahriman (Satan)
The anthroposophical view is that good is found in the balance between two polar, generally evil influences on world and human evolution. Two spiritual adversaries endeavour to tempt and corrupt humanity: Lucifer and his counterpart Ahriman. Steiner described both positive and negative aspects of both figures.

Lucifer is the light spirit, which “plays on human pride and offers the delusion of divinity”, but also motivates creativity and spirituality.  Lucifer is the “light bearer”, carries the message of spirit and denial of the material

Ahriman is the dark spirit, which tempts human beings to “…deny [their] link with divinity and to live entirely on the material plane”, but also stimulates intellectuality and technology. Ahriman is like Satan, who carries the message of materiality and denial of the spiritual.

Both figures exert a negative effect on humanity when their influence becomes misplaced or one-sided, yet their influences are necessary for human freedom to unfold.
Each human being has the task to find a balance between these opposing influences, and each is helped in this task by the mediation of the Representative of Humanity, also known as the Christ being, a spiritual entity who stands between and harmonizes the two extremes. The Christ being, or Representative of Humanity, is the True You – your highest self – your soul.

This approach translates very well to the three pillars of the kabbalah..

We can also incorporate the Chakra system … 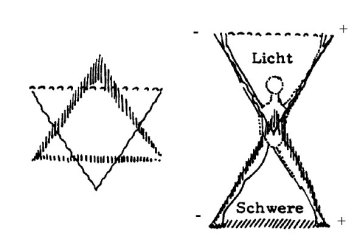 and with the macrocosm…

Can we escape Ahriman and Lucifer by avoiding both of them? You may have thought so, but Steiner’s answer is a firm, “No!” Instead he argues for you and me to maintain a balance between the influence of Lucifer and of Ahriman.

But the truth of the matter is that Lucifer and Ahriman must be regarded as two scales of a balance and it is we who must hold the beam in equipoise.And how can we train ourselves to do this? By permeating what takes ahrimanic form within us with a strongly luciferic element.

We are led inexorably to the conclusion that only by experiencing our world via the external senses of the materialistic scientist and at the same time experiencing the super-sensible aspects of our reality as well can we become full human beings in relation to our cosmic environment.