It’s not an election, not a selection, all this is theater, yet it is critical to vet out the “candidates” to see what is being sold to the masses.

For all with eyes to see, the Freemason Secret Society handshake right in all our faces. 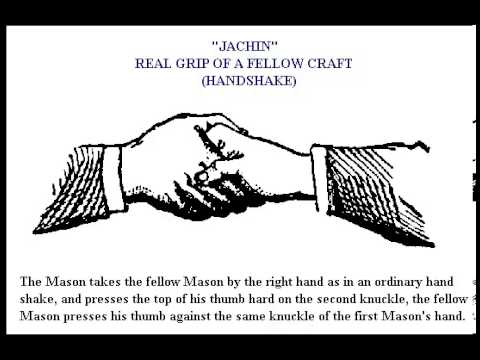 “Of the 56 signatories of the American Declaration of Independence, at least 50 were known to be Freemasons and only one known not to be.”

13 is an important number to the Masons. There are 13 degrees in York Rite Freemasonry, and there just happened to be 13 original colonies (including New “York”). New York is known as the “Empire State” with the “Empire State Building,” but whose Empire? Who’s the Emperor? Perhaps the York Rite Freemasons could tell us? 13 Masons signed the Constitution along with 26 (13×2) non-Masons making 39 (13×3). There also just happens to be 39 members of Rockefeller’s Bilderberg inner-circle and 39 floors in Rockefeller’s United Nations building.

How is it that Freemasonry can operate so openly and yet keep its secrets so well hidden?”

John Coleman, “Conspirators’ Hierarchy – The Story of the Committee of 300”

There are many secret sayings, handshakes, and gestures used by Masons both to recognize one another in public as well as to communicate specific information. For instance, there are many mudras (hand-gestures) commonly used by Masons posing for portraits/photos. A common one is known as “the Hidden Hand” whereby the right hand is placed partially or fully within one’s shirt/jacket. Masonic kings, presidents, prime ministers, and media personalities have been photographed posing the Hidden Hand.

Albert Pike, founder of Scottish Rite Freemasonry and the KKK in the U.S.

Perhaps the most commonly displayed hand-signs are the Satanic Devil Horns, made by bending the middle and ring fingers, extending just the index and pinky fingers. The thumb can be stuck out or clasped in; both are used, and have been by Satanists for centuries. Recently, this along with many other Masonic hand-signs have been leaked into popular culture and given different exoteric meanings to the mislead public.

“The Masonic fraternity tramples upon our rights, defeats the administration of justice, and bids defiance to every government which it cannot control.”

Bribe: Rafael Bienvenido Cruz arrived in the United States on a four-year student visa in 1957. A lawyer friend of the father bribed a Cuban official for an “exit permit” stamp on the father’s passport. In other words, the father used bribery to circumvent the immigration rules. [3]

Abandons the US and acquires another citizenship: While in Canada, Ted Cruz’ father acquired Canadian citizenship. [3]

Sign for Toblerone’s triangular shape or shout out to Illuminati?

Angela Merkel of Germany, gee what a co-incidence

Why was Trump selected?

Trump spent two years at Jesuit Fordham and Trump’s son Eric not only went to Jesuit Georgetown but is a board member of the Georgetown “Business Society and Public Policy Initiative Board of Advisors”.

In fact, the rest of the board lists like a “Who’s Who” in the circles of the Ruling Elite and Controlled Opposition:

Somehow, Reddit allowed this fantastic article by the mysterious Veritas__Aequitas that I will repost in its entirety—

Donald Trump has been the subject of media frenzy as of late.  It seems that a considerable amount of those who subscribe to alternative sources of information are Trump supporters.  They see him as some kind of rebel, going against both the Republican and Democratic parties (as exemplified by his recent non-commitment to support the Republican nominee for President).

Could it be though, that Donald Trump is a “false flag candidate” being used to secure the vote of the ever-increasing independent constituency in order to inevitably lull the US into a false sense of positive political novelty and thus to subsequently impose Jesuitical right-wing fascism leading to a nation-wide race war as devised by the masters of class adversarialism, the Sons of Loyola?

It very well could be.  Here is why:

Trump claims to be Presbyterian, yet he attended Jesuit Fordham University for two years and then transferred to the covertly Jesuit-controlled University of Pennsylvania.1

Court Jew David L. Cohen is the Chairman of the Board of Trustees of the University of Pennsylvania as well as an alumnus of University of Pennsylvania.  He is also the executive vice president of Comcast.5  He was recently named co-chairman of the leadership planning committee of the Roman Catholic World Meeting of Families in Philadelphia (which is the coming of the Pope to Philadelphia!)6

Protestants do not attend Roman Catholic institutions, especially counter-reformation Jesuit institutions like Fordham University, so Trump is at the very least an apostate for having done that. However, the story does not end with Trump.

Out of the five children he has, the three listed on Wikipedia have attended the following schools:7, 8, 9

There you have it; Trump, in addition to being affiliated with both Jesuit Fordham and covertly Jesuit UPenn, has at least three children who are all alumni of UPenn and notorious Jesuit Georgetown University!

Whether it be Trump, Jeb Bush, Hilary Clinton or even Bernie Sanders that ends up winning the 2016 election, all of these candidates are connected to Rome and all will only serve to implement the tyrannical, neo-Romanist policies of the Papacy and its professed soldiers of the Society of Jesus.

Did you know the Statue of Liberty was given to America by French Freemasons? There is another statue just like it in France on an island in the Seine. The character propagated as “Lady Liberty,” supposedly derived from the Roman goddess Libertus, is simply a patriotic pseudonym for the public. Lady Liberty has been known throughout history as Isis of Egypt, Semiramis/Ishtar of Babylon, Athena of Greece, Astarte of Syria, Cybele of Rome, Ashtoreth of Israel, and Diana of Ephesus. She is the Pagan mother Goddess of the Brotherhood, nearly always depicted dressed in robe, wearing a crown of thorns, and carrying the torch of illumination. She is symbolic of both the Moon and “dogstar” Sirius, which is why the English word for God is simply Dog backwards. The “dog days” of summer was coined after Sirius and was believed to be an evil time.

In Washington DC we have the phallic “Monument” facing the female “Oval” office, plus the pentagon and L’Enfant’s pentagrams. In Paris we find “Cleopatra’s Needle” another obelisk in front of the Notre Dame (“Virgin” Mary’s) Cathedral. The Vatican has another masculine obelisk surrounded by a feminine circular building structure. In London, New York, and many other places you will find the same. The Brotherhood has placed their sexual architecture at key geomantic points all over the Earth. “The obelisk and the dome are common sights in the monuments and buildings of the Brotherhood. The obelisk is an ancient phallic symbol of the male energy and solar energy and the dome represents the female or moon energy. Often they are placed together or close to each other. This is the symbolism of the Oval Office (the womb, female) in the White House which looks out on the Washington Monument, the vast stone obelisk (phallic, male). These symbols attract and generate the energy they represent: they are a physical thought form.

The obelisk also symbolizes the penis of the Egyptian Sun god, Osiris. According to legend, after Osiris had been sliced into pieces by his rival, Set, the Queen Isis found all the pieces except his willy. An obelisk claimed to come from Alexandria in Egypt stands in Central Park, New York, and its twin was erected in the 19th century, during the reign of Queen Victoria, on the former Templar lands alongside the River Thames not far from the Houses of Parliament. It is known as Cleopatra’s Needle and originally stood in On (Heliopolis), the Egyptian City of the Sun, from at least 1500 BC, before it was moved to Alexandria… A sphinx has been placed on either side at its London location. Another Egyptian obelisk which was built in Luxor 3,200 years ago now stands in the Place de Concorde in Paris, less than a minute’s drive from the scene of Diana’s crash. On the other side of the crash scene is the Eiffel Tower, another gigantic obelisk in disguise.

Jay Z’s use of the hand gesture prompted pro wrestler Jimmy Page to sue Jay Z for infringing on his intellectual property because Page had used the symbol to indicate his signature move, the Diamond Cutter. (A move derived from Johnny Ace’s Ace Crusher.) Jay Z settled the claim for an undisclosed sum.

The sign has been used previously in many different contexts. In Aleister Crowley’s A.’.A.’., the gesture is the sign for the grade of fire. Wiccans know the symbol as the Triangle of Manifestation.

In the Jewish tradition it was used as the Priestly Blessing of Kohen. Star Trek’s Spock’s Vulcan salute was itself based on this Kohen blessing sign. In Ninja Kuji in magic it is the Kai (在), one of the 9 primary hand symbols used to channel energy.

One of the 9 primary signs of the Ninja Kujiin