It is said history is written by the victors…and no more is this true than in WWII.

Much new evidence is coming out that rewrites what we learned in school and from government propaganda as to the U.S. actions during and after WWII.

There were NOT 6 million ONLY Jews murdered in the holocaust…that number is acknowledged to be off by 85% now with revisionist history and is likely a lot less than even this number but is still leveraged by Zionist to further their hegemonic agendas.

Somehow revisionist history doesn’t seem to ever get revised.

In some countries even questioning the Holocaust is a crime where people are put into jail, yet “Uncle Joe” Stalin, friend of FDR and U.S. killed 20-50 million of his own people, yet this information is passed over

Hellstorm by Thomas Goodrich is a must read, as are the videos below to watch and take in the meaning.  Gen. Eisenhower relabeled the 1 million + captured Germans from POW’s to DEF’s (Defeated Enemy Forces). By labeling such he was not required by the Geneva Convention to provide food or aid provided by the Red Cross.

The million +, old folks, women and children were put in large outdoor pens w/o food and starved to death.  The U.S. then took the top German Nazi scientists through Operation Paperclip and brought them into U.S. where they were installed in the highest levels of government and military. The most famous being Werhner Von Bruan who ran NASA rocket program for 25 years.

Additionally, after WWII, the U.S. loaded up some 4-5 million migrants of Ukranians and White Russians who fled Stalin’s murderous genocide to Germany when WWII broke out and shipped them back to Russia during Operation Keelhaul in sealed train cars knowing full well what “Uncle Joe”, as FDR affectionately called him, would do to them once they arrived back in Russia.

Once Dresden was carpet bombed by U.S. and British Air Force when the war was clearly won, they went back over and dropped incendiary fire bombs on the next bombing runs over Dresden. 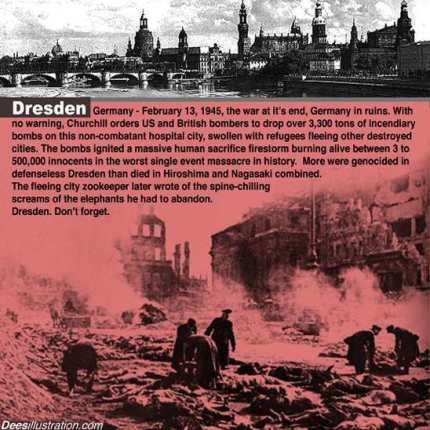 We Did the same to Japan dropping fire bombs over 62 cities in Japan killing 100,000 in Tokyo in just one bombing run.  The U.S. had complete control of Japanese airspace, this was not necessary. Two weeks later we became the only country to allegedly nuke civilian cities in Nagasaki and Hiroshima, yet it is more likely that this is propaganda and fire bombs were also used.

General LaMay’s B-52 reign of terror aftermath.  Pearl Harbor was another great lie as FDR knowingly and willingly provoked Japan into war with the U.S.