RIP Breaking the Set, Abby Martin You Will Be Missed. 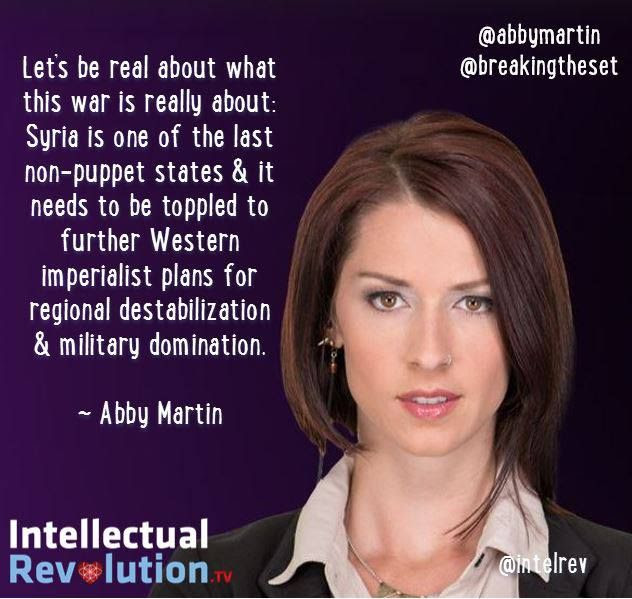 There is yet another unrepairable hole in the whole that is our cosmic fabric of a universal Truth Movement.

Few seem to understand or realize what a significant, worldwide platform for voices of sanity, truth and justice we all just lost. The end came quick and sudden. A bright, brilliantly lit flame of nightly alternative news source, the biggest and only one we had on nightly TV, has been extinguished.

All things must pass.

Those aboard the life long quest to find the truth wherever it leads owe a huge debt of gratitude and appreciation to investigative journalist and former news anchor at RT broadcasting (formerly Russia TV), Ms. Abigail Suzanne Martin and her cohorts.

It has been two weeks now that she so shocked the Alternative News and Truth Movement with her sudden and abrupt departure. For nearly three years and some 534 shows each weeknight on Breaking the Set, Ms. Martin was able to do something no other TV news broadcaster had been able to do before.

She told the truth.

And then she called out the liars, the thieves and named names to the ones who have sold our children’s future. She continually claimed she was her own editor and boss of Breaking the Set and held artistic freedom to present whomever, however and whatever she wanted. No other national news broadcaster had ever held such power.

She presented to a worldwide audience the raw and unfiltered ugly truths on subjects the puppet masters of mainstream media would never entertain, much less provid air time for….yet Truther’s among us so yearned for.

Her segments went under in your head subject headings such as “Think” and “Brainwashed” while she unabashedly bashed the very setting and outlet that gave her show life.

Her style was intellectual, passionate, feisty and with a definite edge to them, which paired well with her changing hair and wardrobe choices each night. (Although truth be told, her very first show she wore a Hillaryesque gray pantsuit!).

She did not hide behind desks or rely on imagery and canned story lines from corporate owned press releases. She did it her way. Move over Frank.

Ms. Martin stayed true to her Media Roots founding and Project Censorship board membership by delivering the most difficult of news stories artistically and without deflection as to the consequences by the powerful authorities she challenged each night.

The show was unique and attractively youthful with a decidedly non-defiant “let’s end all the b.s. right here and now” theme all the while staying both passionate and compassionate to the cause of representing and presenting honest journalism.

From the very onset she took on all centralized power of corporate, military and government. On her very first show she came out a-swinging for the fences.

The shows segments were titled, “USA-made Dictators, NY Times Propaganda and They Hate Us Because We Bomb Then”.  In just her first show she took on the world’s largest newspaper, the world’s largest spook agency and the biggest military the world has ever seen.

The woman had guts few us could ever dream of having.

What maybe was the most impressive about Breaking the Set, night after night, episode after episode, segment after segment, was how she and her staff nailed some of the most important and critical stories of our times with near flawless fact checks and research. The shows format challenged all viewers to connect dots, think critically, and to act for needed change.

She continually gave a voice to the voiceless on an international broadcast stage. She gave hip hop and beat artists a stage to perform. She discovered and promoted the seldom acknowledged do-gooder non-profits making a difference where exposure meant more desperately needed funding in many cases. She even had the temerity to reach out to the smallest of communities across the country.

When last November our County in Mendocino, CA passed a historic local law that legally elevated community rights over state and federal authority as well as providing legal representation for Nature in our courts, she gave us a voice and air time on her show. It took just one email exchange and we were then booked on her show four days later which we then received attention from around the world.  (Source).