On November 2, 2017, Neil Z. Miller made an online announcement that was guaranteed to shock thousands of parents worldwide. In a post, written on the popular social media platform Facebook, Miller exposed that the Centers for Disease Control and Prevention (CDC) had recently hatched a plan to ensure that ALL children were up to date with their scheduled vaccinations, whether they were vaccinated or unvaccinated. He revealed that the CDC had launched a catch-up program which could cause an unvaccinated 5-year-old to receive as many as 19 vaccinations in one month. He wrote that: “The CDC has just launched a program that will calculate a catch-up schedule for children who were not vaccinated on schedule. A 5-year-old child who was not previously vaccinated would be required to receive 19 vaccines in one month, including 6 doses of aluminum-containing injections! This catch-up schedule was NOT tested for safety to determine the immediate or long-term risk of neurological or immunological damage.” Could their latest step be yet another one of the many underhanded tactics used by the CDC to implement mandatory vaccination?
Read More… 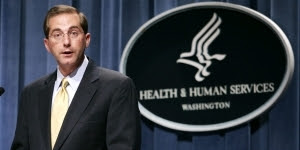 President Trump just nominated former chief lobbyist and President of the US division of drug company Eli Lilly, Alex Azar, to be the next Secretary of the Health and Human Services (HHS). Eli Lilly is the inventor and was the primary manufacturer of thimerosal, a mercury-based preservative used in vaccines that is linked to autism and other neurological disorders. Prior to employment at Eli Lilly, under George W. Bush, Azar was general counsel and later deputy secretary of HHS at the time the decision was made to give an expedited efficacy and safety review to Gardasil, a vaccine for human papilloma virus produced by Merck that has enormous safety issues. As general counsel (head attorney) for HHS, Azar participated in the Autism Omnibus Proceeding that denied more than 5000 claims of vaccine injury, even though HHS settled one of the test cases that found that Hannah Poling’s autism was indeed caused by vaccine injury. While the head of Eli Lily in the US, Azar was also on the board of directors of the Biotechnology Innovation Association, a trade and lobbying association for manufacturers of biological products including drugs, vaccines and GMOs. Azar’s career perfectly mirrors the “revolving door” door between regulatory agencies and the industries that they supposedly regulate in the public interest. The revolving door is one of the clearest indicators of government corruption. Azar is exactly the wrong person to head HHS. Azar must be approved by the Senate, and the Autism Action Network will be working hard to stop his confirmation. Please call the White House and politely express your opposition to Azar’s nomination at (202) 456-1111
Read More…