~ Prediction: Within one year, you will also be required to be vaccinated to travel 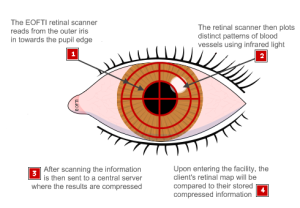 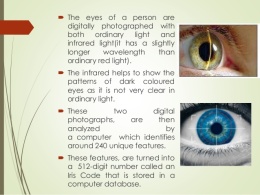 Welcome Aboard… But First US Marshals Will Scan Your Retina

For some 15 years, airport security has become steadily more invasive. There are ever more checkpoints, ever more requests for documents as you make your way from the airport entrance to the airplane. Passengers adapt to the new changes as they come. But my latest flight to Mexico, originating in Atlanta, presented all passengers with something I had never seen before.

We had already been through boarding pass checks, passport checks, scanners, and pat downs. At the gate, each passenger had already had their tickets scanned and we were all walking on the jet bridge to board. It’s at this point that most people assume that it is all done: finally we can enjoy some sense of normalcy.

This time was different. Halfway down the jetbridge, there was a new layer of security. Two US Marshals, heavily armed and dressed in dystopian-style black regalia, stood next to an upright machine with a glowing green eye. Every passenger, one by one, was told to step on a mat and look into the green scanner. It was scanning our eyes and matching that scan with the passport, which was also scanned (yet again).

Like everyone else, I complied. What was my choice? I guess I could have turned back at the point, decline to take the flight I had paid for, but it would be unclear what would then happen. After standing there for perhaps 8 seconds, the machine gave the go signal and I boarded.

I talked to a few passengers about this and others were just as shaken by the experience. They were reticent even to talk about it, as people tend to be when confronted with something like this.

I will tell you how it made me feel: like a prisoner in my own country. It’s one thing to control who comes into a country. But surveilling and permissioning American citizens as they leave their own country, even as they are about to board, is something else.

Where is the toggle switch that would have told the machine not to let me board, and who controls it? How prone is it to bureaucratic error? What happens to my scan now and who has access to it?

The scene reminded me of movies I’ve seen, like Hunger Games or 1984. It’s chilling and strange, even deeply alarming to anyone who has ever dreamed of what freedom might be like. It doesn’t look like this.

I’ve searched the web for some evidence that this new practice has been going on for a while and I just didn’t notice. I find nothing about it. I’ve looked to find some new order, maybe leftover from the Obama administration, that is just now being implemented. But I find nothing.

Update: a reader has pointed me to this page at Homeland Security:

As part of U.S. Customs and Border Protection’s (CBP) border security mission, the agency is deploying new technologies to verify travelers’ identities – both when they arrive and when they leave the United States – by matching a traveler to the document they are presenting. CBP’s goal is to enhance national security and protect a traveler’s identity against theft through the use of biometrics.

Biometric information (such as finger, face, or iris) measures a person’s unique physical characteristics. CBP incorporated fingerprints for biometric identification and verification in 2004, and is now testing facial and iris imaging capabilities to help improve travelers’ identity protection, the integrity of our immigration system, and our national security.

I happened to be on the “one daily flight” that gets exit scanned.

Another change has to do with new rules for Homeland Security just imposed by the Trump administration. They make deportation vastly easier for the government. I have no idea if these rules are the culprit for intensified emigration checks.

Chandran Kukathas is right when he says that “controlling immigration means controlling everyone.”

Regulating immigration is not just about how people arrive, but about what they do once they have entered a country. It is about controlling how long people stay, where they travel, and what they do. Most of all, it means controlling whether or not and for whom they work (paid or unpaid), what they accept in financial remuneration, and what they must do to remain in employment, for as long as that is permitted. Yet this is not possible without controlling citizens and existing residents, who must be regulated, monitored and policed to make sure that they comply with immigration laws.

To be sure, there might have been some tip off that security officials received that triggered these special measures for this flight only. Maybe they were looking for something, someone, in particular. Maybe this was a one-time thing and will not become routine.

The point is that it happened without any change in the laws or regulations. Whatever the reason, it was some decision made by security. It can happen on any flight for any reason. And who is in charge of making that decision?

On the plane, finally, my mind raced through the deeper history here. Passports as we know them are only a little over a century old. In the late 19th century, the apotheosis of the liberal age, there were no passports. You could travel anywhere in the world through whatever means you could find. Nationalism unleashed by World War I ended that.

And here we are today, with ever more controls, seeming to follow Orwell’s blueprint for how to end whatever practical freedoms we have left. And we are going this way despite the absence of any real crisis, any imminent threat? The driving force seems to be this: our own government’s desire to control every aspect of our lives.

Think of it: there might be no getting out of the country without subjecting yourself to this process. It’s a digital Berlin Wall. This is what it means to put “security” ahead of freedom: you get neither.

We’re all used to having to identify ourselves as we enter a country. It is the only way we can hope to have any attempt at a secure border. But, so-called “exit controls,” where documents are checked as travelers are leaving the country, were popularized last century by Nazi Germany as a great way to ensure that they could control, round up, and exterminate the Jews and other “undesirables.” It can obviously serve no purpose of keeping terrorists out, because it only affects those who are already in. The U.S. has never had exit controls, although they remain popular in Europe, Russia, and China.

Last week, privacy advocate and blogger Jeffrey Tucker posted his experience before a flight from Atlanta to Mexico:

Halfway down the jetbridge, there was a new layer of security. Two US Marshals, heavily armed and dressed in dystopian-style black regalia, stood next to an upright machine with a glowing green eye. Every passenger, one by one, was told to step on a mat and look into the green scanner. It was scanning our eyes and matching that scan with the passport, which was also scanned (yet again).