The criminal syndicalists are now looting the American nation of one trillion dollars each year, of which about one-third, more than three hundred billion dollars per year, represents the profitable depredations of the Drug Trust and its medical subsidiaries . Before a sustained effort to combat these depredations can be mounted, Americans must make every effort to regain their health. As Ezra Pound demanded in one of his famous radio broadcasts, “Health, dammit”! America became the greatest and most productive nation in the world because we had the healthiest citizens in the world.

When the Rockefeller Syndicate began its takeover of our medical profession in 1910, our citizens went into a sharp decline. Today, we suffer from a host of debilitating ailments, both mental and physical, nearly all of which can be traced directly to the operations of the chemical and drug monopoly and which pose the greatest threat to our continued existence as a nation. Unite now to restore our national health – the result will be the restoration of our national pride, the resumption of our role as the inventors and producers of the modern world, and the custodian of the world’s hopes and dreams of liberty and freedom.
Eustace Mullins, The Rockefeller Syndicate (source)

The History of U.S. Medicine (38 min)
http://www.corbettreport.com/episode-286-rockefeller-medicine/
Jim Corbett gives an excellent, critical knowledge expose of how a very few private/corporate interests have controlled our medical industry for almost a century and that Obamacare was written solely and exclusively by Big Med.  When corporations run government, the term is called ‘facism’, pure and simple. They can dress it all up as some ‘care for all’ socialized program but in reality only a soulless, for solely profit driven agenda, to keep people sick and only treat them after they get sick.Rockeller medicine tenacles reach far, wide and deep and ownership is hidden behind shell and holding companies.
There reach is so great that they have even been building and funding hospitals in China since the 1970′s. (In old China, one paid the doctors to keep you well and they were not paid if you got sick but had to treat you to get and get you healthy to get paid again…this is what is called ‘preventative care’.)  1-in-5 children are now diagnosed with childhood diabetes. 1-in-4 now have cases of Alzheimer’s, ADHD, Allergy and/or Ashtma or the 4 ‘A’s” as it is now being called. This is unprecedented in the history of childhood health. (source)
As the old time religion axiom espouses ‘get ‘em by six and you got ‘em for life’. Rockefeller medicine has adapted this same practice with modern medicine derived from oil driven farming, chemical laden pharmaceuticals and take a pill, radiate and cut it out surgeries only taught in medical schools.Where the crapification of our food systems, the massive increase in a very questionable vaccination-nation schedule for our children (see below) and the electronic warfare being waged on our energy fields is affecting our mind, body and spirit, it is all being capitalized on by the very few.
If healthcare were truly about the well being of all, then the doctors stated goal should go well beyond do not harm.  It would be every physicians and dentists and healthcare practitioner’s goal to put themselves out of business and to spend most of their time in being educated and in their healthcare practice in promoting and getting all to practice preventative healthcare.
Documentation 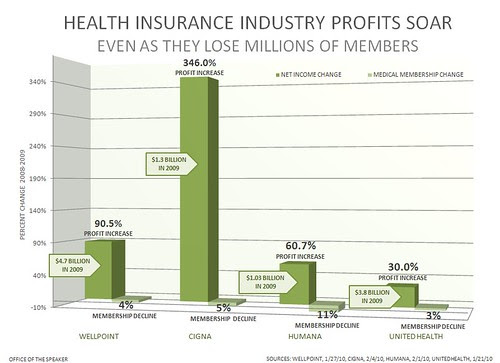 In other words, the world’s richest country spends more of its money on health care while getting less than nearly every other nation in return.

Medical Industry Incurs Record Billions in Fines, Makes Hundreds of Billions in Record Profits…
(and no one ever, ever, ever goes to jail or even has to step done for hurting the customers they are supposed to be healing.)
Pharmaceutical companies have racked up over $11 billion in fines over the last three years for many cases of criminal misconduct. Twenty-six pharmaceutical companies around the world, including eight of the ten largest companies, have been charged and fined for various criminal behaviors, including withholding safety data for new drug approval applications and promoting drug uses beyond the conditions they have been approved to treat.
The largest fine of $3 billion was paid by Glaxosmithkline (GSK) in 2012 after they were found guilty of withholding safety data, marketing drugs for unauthorized uses and cheating the US government’s Medicaid system in the largest case of healthcare fraud ever. GSK marketed their antidepressant drug Paxil as being suitable for children under the age of 18 when it was approved for adult use only, distributed a fraudulent medical journal article and convinced doctors to prescribe more of their drugs by lavishing them with gifts such as meals and spa treatments.Other companies have received fines ranging from $420 million to a massive $2.3 billion, but a lawyer at Boston University has pointed out that, although the fines are huge, when compared to the massive profits that these companies are making, they amount to only a small percentage of total revenue.
The fact is that the drug companies consider the fines to be a cost of doing business, and when the fines are paid, the government that allows this criminal behavior to continue benefits by recouping a portion of industry profits.Meanwhile, pharmaceutical associations are trying to work out how to resolve the problems. With so much criminal wrongdoing, the doctors whose role it is to prescribe these companies’ products are now finding that their trust has been broken.
Many physicians report that they are now dismissing industry-funded clinical trials and research. Due to the regular scandals, patients are also realizing that the industry can’t be trusted, contributing, no doubt, to the rise in interest in natural medicines.

The Financial Seeds of Medical Tyranny

Prior to the early twentieth century, thriving empirical medical practices, herbal and homeopathic, were more popular than allopathic medicine, which at that time specialized in surgery. This changed as influential individuals secured a spot on the financial empire.

The Carnegie, Morgan, and Rockefeller financial conglomeration at the turn of the 20th Century was the impetus toward total power over the medical field. Soon after their initial thrusts, it was the Rockefeller Institute that ensured the growth of this monopoly. After all, it was John D. Rockefeller who was quoted as saying, “Competition is a sin.”

Even the newly formed antitrust laws of the early 20th Century could not deter John D. from figuring out how to get around those restrictions with his oil business. One could say Rockefeller was the Godfather of antitrust law chicanery by playing shell games with his industries and retaining his monopoly.

The early centerpiece of his empire was oil. But early on, JD Rockefeller was aware of expanding his financial empire through the burgeoning pharmaceutical industry. His intention was to control the whole medical field, using the only remedies allowed, patented synthetic drugs.

So John D. started by donating to medical schools, beginning with the University of Chicago’s School of Medicine. The stipulations were that only pharmaceutical based medicine would be taught. Then he hired Abraham Flexner to tour medical schools of other traditions throughout the nation “evaluating” the treatments they taught.

From that came the 1906 Flexner Report, which was sufficient to persuade lawmakers into creating legislation that would license only physicians trained in patented chemical based pharmacology and surgery.

Meanwhile, John D. Rockefeller recruited JP Morgan and Dale Carnegie as partners for buying a controlling share of the German drug cartel I.G. Farben. The AMA had been in existence since 1847 as an allopathic physician’s union. It came into prominence as a ruling medical non-government agency from 1920 on, with exclusive power over granting and revoking medical licensing.

The AMA would ridicule other non-synthetic drug medical practices as “quackery” and ensure those practitioners were driven out of business. After all, competition is a sin, J.D. Rockefeller once quipped. Ironically, it’s reported that during this time, the Rockefeller family used homeopathy for their medical needs.