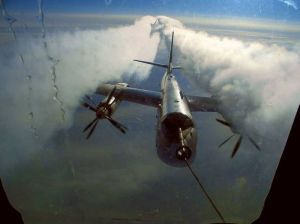 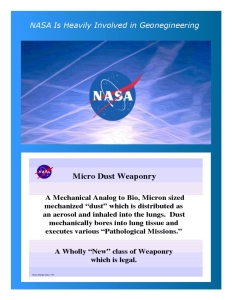 Weather Modification Then and Now

“We have historical documents … on our website, GeoengineeringWatch.org, which is a data repository … like a 750-page senate document that outlines the full scope and scale of these global programs (historically) … So we know these [programs] were fully deployed in the mid 1940s …

We have original issues of Popular Science magazine, Collier’s magazine… from the ‘50s that admitted … that this technology was fully functional. But as time has progressed and as the military and industrial complexes realized the public would not accept this type of manipulation, they’ve gone further and further underground. So we can only guess at the technology they have now.”

That said, patents dating back to 1950 offer clues to their capabilities to manipulate the weather. One NASA patent is for something called Chemical Ice Nucleation for Weather Modification. It describes a process by which rain storms can be chemically nucleated and converted into snow storms. According to Wigington, there’s also clear evidence that the U.S. and other governments are actively engaging in these kinds of weather wars.

“The Chinese government openly announced in 2009 that they were chemically nucleating snowstorms over Beijing,” he says. “They did a billion dollars’ worth of damage to Beijing, at which time they went underground … So at this point, can we really consider any weather natural when we have such massive scales of weather modification programs going on from multiple sources of power? The entire climate system is completely disrupted at this point.”

Unintended Consequences Are Par for the Course

So with what level of precision can weather actually be controlled? Like most science gone awry, are weather modification programs implemented and then end up having far more severe consequences than predicted?

“Very, very key question,” Wigington says. “The term “engineering,” in regard to what is happening to the climate system, is far too dignified a term. We need to use those terms because that’s what leads to the science, but your question is exactly on target. Now they’re trying to alter the term for addressing these programs to “climate intervention” because, ultimately, it’s simply a climate disruption, and there’s no precision to what they are doing at all.

It’s the same sort of scenario going on, but in this case, the consequences will be total [devastation] if we stay on the current trajectory. This is something I know many people don’t hear well. They don’t hear that the intervention with Earth’s life support systems will lead to consequences that are unimaginable …”

Why Public Disclosure Is Not Imminent

According to Wigington, the military and industrial complex is so heavily invested in these programs that any form of disclosure will be extremely difficult to obtain. Just imagine the ramifications if everyone suddenly knew they’ve been subjected to a lethal experiment without their knowledge or consent; that their bodies have been irreparably harmed by inhaling toxic heavy metals and chemicals dispersed in the air, including: Aluminum, Barium, Strontium, Manganese, Lead, Copper.