Zika, Mandatory Vaccinations, REAL ID to fly….all coming down this Fall/Winter 2016/17.  Soon you will not fly, go to a bank or even a sporting event unless your REALID says you’ve obeyed those that have control over your life, unless you get shot up with harmful vaccines.  NO opt outs. No choice. Just take it! 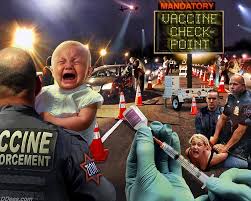 CDC Given Dictatorial Powers To Vaccinate Anyone At Anytime

The U.S. Centers for Disease Control and Prevention literally has overstepped its authority in proposing to grant itself powers that obviously negate any rights U.S. citizens thought they had by issuing the Proposed Rule “Control of Communicable Diseases” on August 15, 2016 wherein CDC will self-invest itself with the power to apprehend healthy people en masse and detain them indefinitely with NO process of appeal!

That mammoth proposed rule is published in the Federal Register [Federal Register Number: 2016-18103] online at this website. Before you read it, I suggest taking a very stiff shot of vodka or scotch, because you won’t believe what you read that is being proposed for what is supposed to be a non-communist country and its people, the USA!

But, the CDC wants to hear your comments about the proposed rule, as if it really cares. Citizens should file your comments at this website before October 14, 2016! Officially, it’s Comment No. CDC-2016-0068-0001.

This proposed CDC rule, in my opinion, is an “end run” or a “Hail Mary pass” around what’s become a nightmare situation in the USA regarding Big Pharma’s ‘sacred cows’—vaccines and vaccinations—which many more healthcare consumers are waking up to being what they actually are: neurotoxic injections damaging children, adults and pets!

In essence, the CDC is creating a police healthcare state, something that was tried in the 1980s when Representative Claude Pepper introduced three infamous bills that got me involved in organizing the country to defeat them, which we did, only now to be facing another round of excessive medical and federal agency over-reach, in my opinion.

What the CDC proposes defies the U.S. Constitution and states Constitutional rights with absolutely NO appeal process. Where is the U.S. Congress, who has oversight of the CDC? However, what should we expect from a do-nothing Congress? Why doesn’t Congress investigate the CDC whistleblower William Thompson, PhD epidemiologist, confession of fraud, deceit and collusion he participated in? Good question?

If this oppressive totalitarian-like proposed rule giving CDC police powers becomes law, kiss your kids goodbye; kiss what you thought you had in life goodbye—your body, which will not belong to you any longer but to the USA via CDC ‘edict’; and expect to be interred in U.S. FEMA camps—something the shadow government and others apparently have been planning for some time.

Just the other day I got notice of FEMA putting out a purchase order request for five million bottles of liter and half-liter size bottle water! What are they ‘expecting’?

‘Like it’s been nuked’: Millions of bees dead after South Carolina sprays for Zika mosquitoes

‘Like it’s been nuked’: Millions of bees dead after South Carolina sprays for Zika mosquitoes

Before America Wanted to Eradicate Them, the U.S. Military was Weaponizing the Zika Mosquito

Zika Virus Made Available to Researchers by Rockefeller Foundation in 1953

Huddled around their hives, beekeepers around the south-eastern US fear a new threat to their livelihood: a fine mist beaded with neurotoxin, sprayed from the sky by officials at war with mosquitos that carry the Zika virus.

Earlier this week, South Carolina beekeepers found millions of dead honey bees carpeting their apiaries, killed by an insecticide. Video posted by a beekeeper to Facebook showed thousands of dead insects heaped around hives, while a few survivors struggled to move the bodies of fellow bees.

“This is what’s left of Flowertown Bees,” a despondent keeper says in the video. Company co-owner Juanita Stanley told the Associated Press her farm looked “like it’s been nuked” and estimated 2.5 million bees were killed.

Amerika home of the sheeple and obedient. No one protests, There are no anti-war movements, we pay our slavery in taxes, we have the highest crime rates, highest imprisonment, greatest debt per capita, outsource all our labor, bring in the best and brightest from India, China, etc. to train at our schools and not one person can tell me when the US Federal gov’t was created?

The Fed gov’t that holds the President, Congress and highest law makers. And no one even knows when the USA corporation was formed that rules us all. Rules as in having a Ruler.

We are told that ignorance of law is no excuse, yet there are over 16 million laws, codes, statutes, violations, infractions, regulations, etc…..yet we are never taught a single law in school or anywhere else. So how are we to know the laws?

This is why everyone is allowed to drive 10 mph over the speed limit, so we all break the laws everyday, that no one even knows, so we are all guilty in this “Law and Order” debt subservience to the overlords who rule and control all. When you use force to make someone do work for you, this is called slavery.

When you are threatened with force to pay taxes for your work and labor to a government you cannot touch, speak to or see, except on TV or in miles away “protest zones”, this is called normal but in actuality paying taxes is also slavery as everyone “volunteers”, or go to jail, to pay their “fair share” so the wealthy can create more war against those that did nothing to us and run up massive debt loads our children will be in debt servitude to.