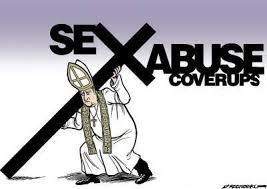 [Source] Can you put a price on the innocence of a child?

No, of course you cannot, but you can put a price on how much the Roman Catholic Church (more popularly known as the Vatican) has paid out in lawsuits for the epidemic of child sex abuse that is rampant in its ranks.

Jack and Diane Ruhl of the National Catholic Reporter, decided to research this particular topic and what they found is disgusting. Since 1950, the Vatican has spent  did.

According to their research, since 1950, the Vatican has spent a mind numbing $3,994,797,060.10! Nearly $4 billion. And this is a conservative figure because we will never actually know for sure what was agreed upon “under the table”.

According to Patheos Insider who summarizes the disturbing findings;

That figure is based on a three-month investigation of data, including a review of more than 7,800 articles gleaned from LexisNexis Academic and NCR databases, as well as information from BishopAccountability.org and from reports from the U.S. Conference of Catholic Bishops.

Up until now, “nearly $3 billion” has been the most widely cited figure by media, academics and activists for the cost to the U.S. church for clergy sex abuse and its cover-up. NCR research shows that figure is too low, probably by as much as a billion dollars — and perhaps much more.

As a way of illustrating the magnitude of the costs to the U.S. church, if that amount were divided evenly among the nation’s 197 dioceses, each would receive nearly $20 million.

This is sick on so many levels. Innocent hard working people are giving their hard earned cash to the Church out of good faith and intentions which is then being used for law suits to pay for the crimes of sick “priests” that are sexually abusing little boys! It is beyond insane.

Which Pedophile President Are You Voting For?

For the first time in this country, a report into child sexual abuse exposes an attempt by the Holy See to frustrate an inquiry in a sovereign, democratic republic as little as three years ago, not three decades ago. And in doing so, [we excavate] the dysfunction, the disconnection, the elitism that dominate the culture …

When Will Whorporate Media Begin to Report on Mass Presidential Sexual Abuse over the Decades?

Every President, since the Reagan days, has been implicated by many women who claim they were “Presidential Models”, or sex slaves to the President(s).  Carter, Reagan, the really sick Ford and onto the Clinton’s and rumors of Obama’s ‘gayness” and Michelle (Michael’s) “manliness” are all proven more likely than not. Women who have been ritually …

Next Presidents Partner & His Pedophillia Pleasuring

Tbere’s no other way to say it folks. The President of the U.S. is a whore, male/female or whaterver, to  their puppet master owner (think Jesuits!) and more than 99 % of the U.S. is absolutely clueless, yet the evidence is beyond overwhelming and you will never see this reported on whoporate news, at your …

Which Pedophile President Are You Voting For?