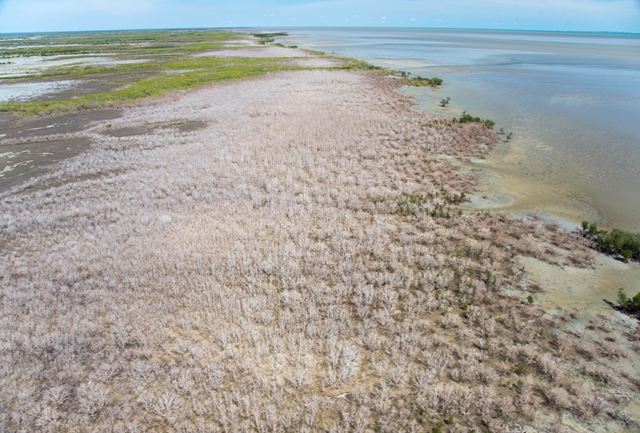 (AAP) – Scientists are worried about an “unprecedented” dieback of mangroves in northern Australia and the link with large-scale coral bleaching of the Great Barrier Reef.

The widespread damage to mangroves around the Gulf of Carpentaria has been highlighted at an international wetland conference held this week in Darwin.

While a detailed scientific survey has yet to be undertaken, photographs revealed hundreds of hectares of mangroves dying in two locations along both the west and east coastlines of the gulf.

Professor Norm Duke, spokesman for Australian Mangrove and Saltmarsh Network, said the scale and magnitude of the loss appears “unprecedented and deeply concerning”.

Prof Duke said the damage was particularly alarming given this year’s severe coral bleaching of the Great Barrier Reef, as it appeared to correlate with extreme warming events in the region.

Until more extensive research is done, the James Cook University professor isn’t sure if the mangroves are beyond saving but is warning more needs to be done.

“Shoreline stability, and fisheries values, amongst other benefits of mangrove vegetation, are under threat,” he said.

Prof Duke has called for increased monitoring of mangroves, particularly in the remote areas of northern Australia, so scientists can establish baseline conditions and isolate and manage any dieback.

Australia is home to seven per cent of the world’s mangroves.

Let’s Be Honest; We’re All Screwed