In these series of articles over the past few weeks we chronicled the call for getting rid of cash in Europe, banning the EU $500 bill as well as former Fed Chairman, Larry Summers, calling for a ban on the hundred dollar bill to …wait for it…”fight terrorism”.  ugh!

Here is where we are heading folks and it you let the, if you have no other means of self reliant, self sufficient existence you will be forced to subscribe to biometrics to get on a plane, go to school or go into any Fed building. Non compliance will get you on many, many lists….

Creating your own food, water and energy creates your own “currency”. Getting your neighbors to do the same, allows for stability and protection to be sovereign humans going forward. 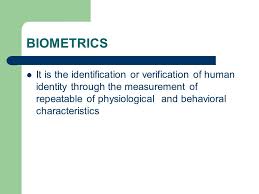 As a perfect indicator of the target market, please read this sad quote:

“Imagine if you could rush through a drive-thru without reaching for your wallet, or pick up a hot dog at the ballpark without fumbling to pass coins or your credit card to the cashier,” Bhat said. (Source)

In one sentence, that quote might represent literally everything that is wrong with modern society. The new system is being cleverly called Hands Free; and, as the second indicator of its potential mass appeal, it will be rolled out first at McDonald’s and Papa John’s fast food restaurants.

A second more serious component to this ties in with the recent rollout of citywide WiFi systems that keep people connected at all times. Layered on top of that is the arrival of billboards with hidden cameras built in that can film you, then track you through your mobile phone. This reality makes the following information more chilling than convenient:

The digital wallet uses Bluetooth and Wi-Fi connections alone [sic] with location sensing capabilities in smartphones to detect when someone is near a store enabled with Hands Free payment technology.

“When you’re ready to pay, you can simply tell the cashier, ‘I’ll pay with Google,’” Bhat said.

“The cashier will ask for your initials and use the picture you added to your Hands Free profile to confirm your identity.”

At some locations, Google is experimented [sic] with using cameras in stores to recognize peoplewith Hands Free digital wallets so they could pay without even pausing. (emphasis added)

The number of people already prepared to accept this system numbers in the millions, according to Google. Although this announcement would appear to border on satire, please view the videos below to get an idea about a world where cash is seen as a major annoyance, and laziness is embraced as a virtue.