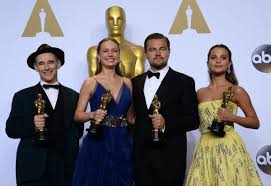 Ah, wake up and smell the hypocrisy~

Hollywood and the Oscars playing annually at the Theater of the Absurd to the Absurdity that a movie is reality and verse-vice.  (“you love me, you really, really love me” ~ Sally Fields)

Where else could you have the VP of the U.S…. the Roman Catholic handler to Pres. Obama, representing the Vatican, the institution of the greatest child abusers in history…

…held amongst the greatest abusers of children in movies (along with “Uncle Walt”, of course)

The Evil Dark Side Of All Things Disney

….while Leonardo and Lady Gaga? (get it Ga-Ga as in to choke on something), herself an abused mind controlled slave for the music industry. all dressed in Virgin White, to sing the torch song for the abused and tortured (which the U.S. policy on torture is still perfectly legal and practiced on innocents, who many aren’t even charged with any crimes).

It’s a sick, sick world and until more become aware, more become angry, and more speak out against such uber-hypocrisy,….the abuse of children will only continue and increase, while Holly-wood celebrates to the sheeple how much they really, really, really care.

Makes me want to puke.