With $100 billion a year now being spent on toxic chemotherapy treatments that damage patients and cause “chemo brain” side effects, a panel of cancer experts commissioned by the National Cancer Institute publicly admitted two years ago that tens of millions of “cancer cases” aren’t cancer at all. 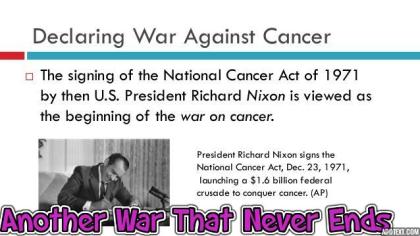 Does Treating Poison by giving you more poison make any sense to anyone except the for profit and increased shareholder value?

Mammograms increase the risk of Cancer

Manufacture and sell all types of cancer causing chemical products in our food, in our air, in our homes, radiate the world w/ radiation devices over decades to increase cancer rates knowingly.  Reaction: Every year increased cancer. Solution: Give them radiation to cure …..radiation poisoning creating more cancers and even greater profits.

With Cancer expected to increase 70% by 2030, in just 15 years, according to WHO, profits will be huge going forward at the illness’ of those doctors profess to cure and heal, yet never, ever deal with preventing illness or prescribing organic food, getting off of, and away from deadly Wifi or halting GEoengineering of our skies.  NEVER!

Now they are legalizing marijuana because it is curing all types of disease as well as being a huge cash crop, hence the elimination of cash as a currency, as I’ve posted recently.  So GW Pharmaceuticals and Big Pharma now are taking marijuana extracts and adding chemical compounds to ….wait for it…

…yet after 46 years of a “War on Cancer” we simply cannot seem to find a cure…but hundreds of billions spent, tens of billions of profits for Big Med, while a weed is curing all types of cancer

What a really, really messed up world.

And it is all by design, some 85 years ago when the first medical training schools were established by the Wealthy elite.  https://avvi.info/history-of-western-medicine/

Oncologists and the breast cancer industry prey on systematic over-diagnosis of cancer in order to scare patients into unnecessary treatments. These treatments are helping generate $100 billion a year in chemotherapy revenues, often for so-called “cancers” that shouldn’t even count as cancer in the first place.

“Physicians, patients and the general public must recognize that overdiagnosis is common and occurs more frequently with cancer screening,” warns the NCI-commissioned science article in JAMA.

A 2002 editorial in the Annals of Internal Medicine maintained that the efficacy of mammograms for younger women is an open question. “The debate is worth following closely,” concluded the editor of the journal, “because women are deciding about breast cancer screening, and it’s our role to keep them informed as best we can.” Yet it is worth remembering that “mammography screening may lead to an overdiagnosis of breast cancer, that is, the detection of a tumor that would not have become clinically detectable in the patient’s lifetime.” – from the book “What If Medicine Disappeared” by Gerald E Markle.

This all confirms what I’ve said over and over again as a consumer health advocate: The cancer industry uses scare tactics that smack of “medical terrorism” to recruit frightened women and men into unnecessary — but highly profitable — cancer “treatments” that benefit no one other than the cancer industry quacks (oncologists).

As first published in Natural News:

The report drops a few major bombshells on the way that many cancers are diagnosed. Breast cancer, for instance, is sometimes not breast cancer at all but rather a benign condition such as ductal carcinoma in situ (DCIS). However, untold millions of women with DCIS have been misdiagnosed as having breast cancer, and subsequently treated for a condition that likely never would have caused them any health problems. And similarly in men, high-grade prostatic intraepithelial neoplasia (HGPIN), a type of premalignant precursor to cancer, is commonly mistreated as if it was actual cancer.

“The practice of oncology in the United States is in need of a host of reforms and initiatives to mitigate the problem of overdiagnosis and overtreatment of cancer, according to a working group sanctioned by the National Cancer Institute,” explains Medscape.com about the study. “Perhaps most dramatically, the group says that a number of premalignant conditions, including ductal carcinoma in situ and high-grade prostatic intraepithelial neoplasia, should no longer be called ‘cancer.’”

Bill Sardi, author of “You Don’t Have to Be Afraid of Cancer Anymore” also adds this:

Overdiagnosis refers to the detection by screening (mammograms, PSA tests) of cancers that would not have become apparent to a doctor or produce symptoms detectable to the patient before an individual died of other causes. Cancer is prevalent, far beyond the number diagnosed in human populations, and most adults will die with, but not of, their cancer. Treatment and invasive or toxic screening methods (radiation from x-rays, mammograms, needle biopsies) for tumors that may never progress to cause symptoms or death in an individual’s lifetime would represent overdiagnosis and needless treatment.