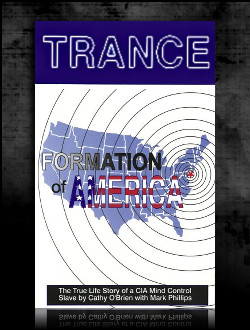 Cathy O’Brien’s story needs to be learned by all.  This abuse must end now.

She chronicles her traumatized abuse since childhood where her handlers would tell her that if she ever took marijuana, they would kill her.  Now we are learning that weed prevents covert mind control.

My name is Cathleen (Cathy) Ann O’Brien, born 12/4/57 in Muskegon, Michigan. I have prepared this book for your review and edification concerning a little known tool that “our” United States Government is covertly, illegally, and un-constitutionally using to implement the New World Order (One World Government). This well documented tool is a sophisticated and advanced form of behavior modification (brainwashing) most commonly known as MIND CONTROL. My first hand knowledge of this TOP SECRET U.S. Government Psychological Warfare technique is drawn from my personal experience as a White House “Presidential Model” mind-control slave.

I feel extremely fortunate to have survived my CIA “M K Ultras” mind control abuses. I’m extremely fortunate to have survived the White House/Pentagon level that I was forced to operate under. Many government secrets and personal reputations were staked on the belief that I could not be “deprogrammed” to remember those things that I was supposed to forget. They were wrong.

According to Cathy O’Brien, a former mind-controlled sex slave for the gov, they would let slaves take all the drugs they wanted, except marijuana. Why? Because marijuana usage made it impossible to mind control them. It doesn’t allow for the compartmentalization of the mind to take place. Since I heard her say that on a video a few years ago, I have understood the “war” on drugs in a little different way. I think you might find this of interest!

The Government has been practicing covert mind control operations on many in this country now for decades and the targeted individuals are being used as slaves, some for Presidential services.

Cpl. Aaron C. Masa became fast friends with a fellow Marine during field training in North Carolina. But behind his buddy’s back, Masa was sexually abusing his friend’s 3-year-old stepdaughter. He also took sexually explicit photos of the girl and the Marine’s infant daughter. A military judge convicted Masa last year of sexual abuse of a child and production of child pornography, according to court records and other documents detailing the case. Under the terms of a pretrial agreement, he pleaded guilty and received 30 years in prison. In total, incidents involving sexual assault in which the children of service members are victims occur hundreds of times each year, data the Defense Department provided exclusively to The Associated Press show. The abuse is committed most often by male enlisted troops, according to the data, followed by family members.