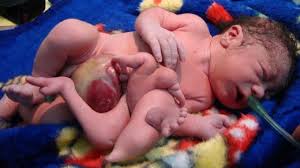 I you do not like this picture above, imagine being a mother in Iraq, Afghanistan, Syria, Libya, etc. who have/are suffering due to our killing machines and collective silence on things that matter most, our children.

Then learn it was all a lie to take over your country as private military murder your family and friends. All based on huge, massive lies, while those in the U.S. and Britain remain ever so silent.

With the cameras rolling, Mr Zakaria asked Mr Blair: “Given that Saddam had no WMDs, was the war a mistake?”

He replied: “I apologise for the fact that the intelligence we received was wrong. I also apologise, by the way, for some of the mistakes in planning, and certainly, our mistake in our understanding of what would happen once you removed the regime. But I find it hard to apologise for removing Saddam.”

Tony Blair has made apologies about aspects of the Iraq War for the first time and has said there are ‘elements of truth’ in the theory that the invasion helped feed the rise of the so-called Islamic State (Isis).

In an television interview with the US network CNN, the former British Prime Minister said he was sorry that the intelligence behind the decision to attack Saddam Hussein’s regime in 2003 was wrong, and admitted there had been mistakes in the planning of the operation.

He had been asked how he felt about the failure to find weapons of mass destruction in Iraq as he took questions from American political broadcaster Fareed Zakaria in an interview due to be broadcast by CNN Europe on Sunday. It is as part of a longer documentary, Long Road To Hell: America In Iraq, set to be screened on Tuesday.

~ So what if trillions of dollars have been spent, DU is detonated throughout the country where over 1.5 million innocent men, women and children have died to U.S./British/Allie lies that immorally and amorally disregarded all Humanitarian Treaties and Conventions to invade and destroy the lives of Iraqi’s???

Now, former co-architect, Tony Blair says “sorry” while O-bomb-ya all says we will remain in Afghanistan for more years, after declaring the “war over” there in 2012, remember???

Why Americans and Brits remains silent, why all are not calling for a military tribunal to prosecute these war criminals, Blair, Bush, Obama, both Rices, Cheney, Rumsfeld, etc. is beyond the pale.

The Truth About Diego Garcia: 50 Years of Fiction About an American Military Base

EXCLUSIVE: ‘I am a prince and I do what I want.’ Cocaine-crazed Saudi royal ‘threatened to kill Los Angeles mansion staff who watched him being pleasured by male aide’