“Is it possible for a human being to live without ingesting carbon based foods?”

Breatharian: Someone who believes that food (and possibly water) are not necessary for human sustenance. Breatharian’s claim that the body can be sustained solely by prana (the vital life force in Hinduism), or according to some, by the energy in sunlight. 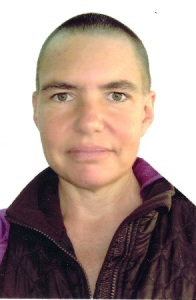 I recently had the great pleasure of meeting Sarah Wilds who stayed at our ranch for a few days.

I have known her Mother for several years who had rented the house where my family currently resides.

Sarah does not eat or drink for weeks at a time. When she does eat, it is only minimal amounts. Through will, mental training and daily meditation she has trained her mind, body and spirit to transition to a prana lifestyle.

She stayed on our ranch for four days and did not leave. In that time I did not see her eat or drink anything and her energy and vitality was elevated. Her skin clear and radiant and her physique trim, healthy and strong.

Here is her responses to some questions I asked her to respond to. (for more on this amazing story please read the book, “Living on Light” and check out their website here.

How did you start on this path of not needing food or water to live?

I started when I friend of mine told me she just met a woman who had not eaten in 17 years. In that moment, I knew deep in my bones that it was true and possible. The thought in that moment was: I have been lied to my entire life. I didn’t eat for three days after hearing that. I got weak physically and did not know there was a whole process to it.

How has it changed you physically, emotionally, spiritually?

On a physical level, to know I don’t need to eat changes my whole relationship to my subsistence. I no longer have to make sure I get enough protein or greens or vitamins in my diet. If food is not sustaining me then I am simply eating out of habit and conditioning and hooked on taste, i.e. sense pleasures. The tongue is one of the sense pleasures in the body and thus hard to harness.
On an emotional level I am no longer living in fight or flight. “If I don’t eat, I will not have enough energy, I will not last, I should eat now so that I am not hungry later, I need this to heal that, I will, x,y,z.”  Fill in the blank for your own habitual story. It also is no longer an emotional substitute so all our existential fears get to surface and be looked at and healed.
Spiritually: It frees up and opens my heart. I am no longer operating from my gut. The energy gets to move from the gut to the heart. Huge shifts. Happier, more content, less anxious, I can really focus on people and not on food, it is incredibly liberating. I am really not giving it justice as it is so profound of a shift. Also I am no longer in adverse relationship to anything. Animals and plants alike know that I am not going to kill and eat them and it makes everyone relax and thus creates more love.
***
What obstacles (personal, community, etc.) have you had to overcome?
Many. I am still transitioning. It is a very personal process and one must work through all the levels, physical, emotional and spiritual to fully transition. I have been stuck in the emotional for quite some time even though my body has fully transitioned. And one deal’s with disbelief almost every where I go. So I am walking upstream in some ways and in other ways it is the thing that makes the most sense and feels the most loving and peaceful to me.
***
How has it effected your health and well being?
Health wise: It took me a few years to get physically 100%. I kept transitioning and feeling weak. Now I can transition and nothing happens. I had lots of little side effects. Rashes on my neck, itching, heat, cold spells, etc…during the process years. But that was my body actually telling me that it did not want food when I was still eating. Then more recently, I didn’t eat for two weeks and then ate and I immediately got canker sores on the roof of my mouth. My body was really rejecting the food. I can still go back and forth as that went away but more and more, my body does not like food inside of it.
Well being: I am so much happier when my body is living without food. 100% happier and just a great sense of well being and inner joy. To know that one is happy just as is. Nothing is needed. Nothing. It is truly peaceful, calm and joyous for no reason in those times.
***
What has been the most difficult part of the adventure?
Living it out day to day. We live in a society that is addicted to food but no one will admit it. The food industry does not want to let us know, they just make it more refined and thus it is harder to see that it is a distraction and addiction. So I slip and fall back into the addiction with the masses and go unconscious and get emotional soothing from it since it is an acceptable and even encouraged societal addiction. And since it is so ingrained in people’s coping mechanism, they really don’t want to look at the possibility, it really frightens them, so they rather tell me I am wrong and try to get me to come back into their unconscious world, that is safer for them rather than having to look at the facts and try it on. It would just be too scary and bring up too much. Not possible for most people.
***
How many Breatharians are there?
Many people are living on prana now. Very popular in Germany, France, Poland. I would guess there are 1000 or so. I personally know over a dozen.
***
Is this a practice of mind over matter, literally?
Yes, mind over matter, if one is ready spiritually to look into it with open eyes, curiosity and try it on. It is completely possible and the mind needs to be convinced of it. If one still walks around believing that one will die if one does not eat, then it will not work properly and cannot be anchored in the body in a successful way. There will undoubtedly be kinks to work out, meaning old beliefs to be dropped.
(Sarah is currently seeking a Monastery to live in. She has found it difficult in that even Buddhists are reluctant to accept her life style due to their concerns over her health and well being.) 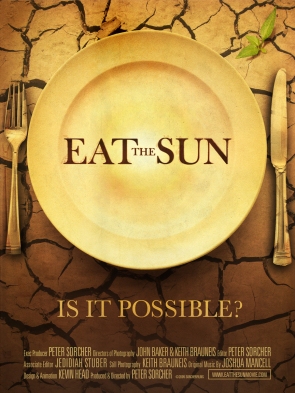 Is it possible to stare directly into the sun and not eat food? Meet Mason.

Eat The Sun is a feature length documentary that focuses on a young man’s journey into the little known world of sungazing — an ancient practice of looking directly at the sun for long periods of time.

San Francisco, CA  2004:  A flyer at school advertising a lecture by an elderly Indian gentleman sparks the imagination of a young man named Mason. The flyer reads: “You can become solar powered.” It also states that the Indian man giving the lecture, who goes by the acronym HRM, has not eaten in over 8 years, a direct result of sungazing.

Intrigued, Mason begins this simple practice along with a few other classmates. Everyday, in accordance with HRM’s protocol, they stand barefooted on the bare earth looking directly into the sun and every day they add 10 seconds to their sungazing time. The goal, according to HRM, is to reach 44 consecutive minutes of looking directly at the sun — which could take 9 to 12 months to achieve — at which time one would be “fully charged”, meaning not only cured of all mental and physical ailments but also now without the desire or need to eat food.

In many ancient civilizations — from the Incas and Aztecs to the Greeks and Egyptians – this practice was exclusive to only the high priests and forbidden for ‘ordinary’ people. Today, with the help of the Internet, this revived practice is gathering global momentum.

Modern day sungazers claim a multitude of health benefits including better eyesight, enhanced vitality, weight loss and, in some more profound cases, a complete loss of the desire and need to eat food. The main theory of how this is possible focuses on the stimulation of the pineal gland from direct sunlight entering the brain via the eye – the only external expression of the brain – and traveling along the retinal-hypothalamic tract. (The pineal, once believed to have no function, is now considered a master gland, controlling the secretion of melatonin and serotonin). Brain scans of HRM, age 70, reveal a pineal gland 3 times the size of a normal man, despite his advanced age when the pineal tends to shrink. (Additionally, HRM was part of a 411-day medical study during which time he did not eat).

Mason soon discovers that this journey is going to be a lonely one, as society seems to revolve around food; family gatherings, social functions and dating all center on eating. But as his sungazing time increases so do the positive effects. As a former Olympic hopeful in ski jumping and cross-country skiing, Mason has experienced both physical and mental strengthening and he finds that sungazing is far more potent than anything he has felt before. On the downside, he is alienating himself from society; his girlfriend breaks up with him because of his obsession with sungazing, and others, including his family, are put off by his new zealousness.

When Mason approaches 40 minutes of sungazing his desire to eat fades. His conflicts are socially and culturally driven and counter to what he is actually feeling.  The only reason he eats anything at all is because of social expectations and some self-doubt. Can this really be happening? Is it possible?

LIVING ON LIGHT: THE EXPERIMENT

Can you imagine, if we did not have to eat, just how free our lives would be?

A vast amount of time, effort and resources go into merely putting food on the table. If humans did not have to eat, we could turn our planet back into a place of beauty. Our land could return to its pristine state, used for pleasure rather than need. Animals could be treated with respect. Time could be utilized for pleasure rather than the grind of work. Chemicals in the soil would no longer be needed and neither would all the destruction from the highly mechanized food industries.

What is “Living On Light”?

What is the “Living On Light” Experiment

“Living On Light” is a Spiritual Endeavor

The Birth of An Idea

The End of the Experiment

Is Food an Addiction?

The Psychological Need to Eat

“Living on Light” is Not Starvation

What This Experiment will Not tell us

Others Who Have Lived on Light

Mission, Purpose and Goals of:

The “Living On Light” Experiment

Why would Someone want to Live On Light?

3 thoughts on “Interview with A Budding Breatharian”