(The following interview about a family who in CA who has been traumatized by police and county officials, along with additional police-state news and is critical for all to understand that we now live in a total militarized police state.

One can either take this information and further live in fear or take action to change what must be changed.  Please forward to friends, family and colleagues if you find this relevant to them as well.)

The family in this story is lily white from a middle class with two children living in CA. What has happened to them could happen to anyone one of us who have thought this kind of police state action only happens to at a distance and is profiled to racial minorities, criminals and drug users.

Pay close attention as the mother of her 70 pd., 12-year old son painfully learns that the state owns her children, not she and her family. This young boy, whose only crime was to spray paint a wall is arrested several times, shackled hand and feet, charged as an adult, and tortured traumatically while incarcerated was arrested several times and the family put through living hell while she and her family learned to fight back.

This could be your family next since there is zero accountability to the police state we are all living under now. Please donate to help them if you can.

Our children and school officials are being conditioned to accept the police stay and be OBEDIENT to authority.   This also shows how state trumps parents rights in our system of authority by central government and if you get out of line, Child Protection Services, can and will take your child.

‘I thought he was going to shoot me.’ Unsuspecting middle school students terrified by active shooter drill.

(Please think about what officials are saying. Parents only get to be informed after these pre-planned actions by the police state.)

According to Fox affiliate WTVT, officials at Jewett Middle Academy e-mailed parents to inform them of the drill, after it took place. By that point, WTVT reports, cellphones were already filling up with texts from frightened students, who thought there was a real shooter in the school.

In a later statement to The Post, spokesperson Jamie Brown for the Winter Haven police department said they were only aware of one student who texted a parent during the exercise.

“Unfortunately, no one gets an advanced notice of real life emergencies,” Polk County Public Schools spokesman Jason Gearey said in an e-mailed statement to The Washington Post. “We don’t want students to be scared, but we need them to be safe.”

Apparently according to a homework sheet being given to our 2nd graders in this country about how to be good citizens, the government *gives* us our rights. Did you know that? And the government doesn’t just give us rights, but the government specifically gives us “special privileges called rights.” This is what eight-year-old kids are being taught in this country.

Prepping the kids to accept their servitude and comply to authority with very good obedience.

Introducing: the first school installation of a Shooting Detection System, brought to you by DARPA (the Defense Advanced Research Projects Agency) and its affiliated contractors.This $100,000 detection system alerts authorities automatically to gunfire with the aim of cutting response time, but it can’t stop bullets or save lives – at least not in any direct sense:
Read more »
*****
***

Civil Asset Forfeiture. Your Money Please..and You Have no Rights

Cash seizures can be made under state or federal civil law. One of the primary ways police departments are able to seize money and share in the proceeds at the federal level is through a long-standing Justice Department civil asset forfeiture program known as Equitable Sharing. Asset forfeiture is an extraordinarily powerful law enforcement tool that allows the government to take cash and property without pressing criminal charges and then requires the owners to prove their possessions were legally acquired.

The practice has been controversial since its inception at the height of the drug war more than three decades ago, and its abuses have been the subject of journalistic exposés and congressional hearings. But unexplored until now is the role of the federal government and the private police trainers in encouraging officers to target cash on the nation’s highways since 9/11.

“Those laws were meant to take a guy out for selling $1 million in cocaine or who was trying to launder large amounts of money,” said Mark Overton, the police chief in Bal Harbour, Fla., who once oversaw a federal drug task force in South Florida. “It was never meant for a street cop to take a few thousand dollars from a driver by the side of the road.”

To examine the scope of asset forfeiture since the terror attacks, The Post analyzed a database of hundreds of thousands of seizure records at the Justice Department, reviewed hundreds of federal court cases, obtained internal records from training firms and interviewed scores of police officers, prosecutors and motorists.

Under the federal Equitable Sharing Program, police have seized $2.5 billion since 2001 from people who were not charged with a crime and without a warrant being issued. Police reasoned that the money was crime-related. About $1.7 billion was sent back to law enforcement agencies for their use.

Justice spokesman Peter Carr said the department had no comment on The Post’s overall findings. But he said the department has a compliance review process in place for the Equitable Sharing Program and attorneys for federal agencies must review the seizures before they are “adopted” for inclusion in the program.

Attention Please share this ASAP! | Veritas Special Report | Wolfgang W Halbig | Threatened for Exposing the Sandy Hook Gun Grab Coverup | Former police officer, school principal and national school safety consultant shares his views and his effort to investigate the Sandy Hook Coverup. | If you have read the news, then you knew where Connecticut is today as it relates to gun control. This seems to be a beta test. Let’s expose this so that the beta test is not rolled out nationwide. Thanks to Wolfgang Halbig for his bravery and for speaking the truth.

Wolfgang Halbig has the perfect combination of expertise to evaluate what happened at Sandy Hook Elementary School:

His conclusion after ten months of motivated investigation:

“In my professional opinion, [Sandy Hook was] a scripted event… in planning for maybe two, two and a half years.”

Mr. Halbig’s response is demand for criminal arrests of “leaders” involved in Sandy Hook based on rational embrace of the public evidence he explains in the interview: 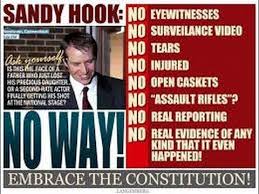 A classic example of the blanks comes up when you talk about where are the kids that are evacuating the school.  There were helicopters that were circling overhead.  They certainly would have been able to show, you know, hundreds of kids exiting the school.

The “most extraordinary proof”

In the face of abundant “extraordinary proof”, which I presented during our debate, Count One challenged its authenticity across the board. Since we have documented it from publicly available sources, it constitutes (what is known as) a prime facie case, which is entitled to be accepted as true absent any rebuttal, which Count One made no effort to provide. It was a debating stunt that no one should take seriously. It was a verbal charade.

This case abounds with extraordinary proof that has been published in “Top Ten Reasons: Sandy Hook was an elaborate Hoax”, “Sandy Hook Elementary School: Closed in 2008, a stage in 2012″ and “The Newtown School Board meeting and the meaning of silence”, including, for example:

* that the final report from Connecticut authorities does not included the names, the ages or the sex of the alleged victims of the shooting: THAT IS EXTRAORDINARY!

* that the Clerk of Newtown entered into secret negotiations with the state legislature to avoid releasing their death certifications: THAT IS EXTRAORDINARY!

* that Connecticut State’s Attorney Steven Sedensky opposed the release of the 911 calls and had to be denied withholding them by courts: THAT IS EXTRAORDINARY!

* that a special panel of the state legislature recommended state employees who released information about Sandy Hook be subject to an E-felony: THAT IS EXTRAORDINARY!

* that those who were involved in the demolition of the school building itself were required to sign life-time gag orders about anything they saw or did not see: THAT IS EXTRAORDINARY!

What good reason could there possibly be to withhold the names, ages and sex of the deceased from the final reports about this child massacre? The claim was made that it was to spare the feelings of their parents, but think about it: their parents already knew they were dead!

Perhaps the most extraordinary proof, however, is the “iconic” photograph that was taken by Shannon Hicks, Associate Editor of The Newtown Bee, which Dennis Cimino and I have subjected to an extensive and detailed analysis. It is the only photo we have seen of any children being evacuated from the school:

Hicks reportedly took this photo “as an associate editor” and then, when another editor arrived, “changed into her firefighting gear and tried to help.” The account was promoted by NPR. Rather to our astonishment, Dan Cady, “The Sun and Sandy Hook”, had established the fact of the matter on 14 January 2013, more than a year-and-a-half prior to our efforts.

WTF?  Kids standing around with hands in pockets are WATCHING A DRILL not a live, multiple kill, terrorist event that just occurred.  Also, where are the police cars, the medics, the other 500 + children???

There was no emergency in progress, the people behind Hicks are all clearly part of a DRILL by their body language, where the at line sequence in the first photo is without the girl in the front, meaning her claim that she just took that photo is absurd because they STAGED MANY SHOTS and THEN SELECTED THE ONE THEY THOUGHT WAS BEST after compelling one of the kids to make an odd face, where close examination of the kids suggests that they were no more threatened than they would be at McDonald’s waiting for a milkshake.

Dan Cady has conjectured that Shannon Hicks is taking the picture of the conga line and the parents. It is his guess that Lisa Terifay (near center, blue sweatshirt, clear line of sight to the kids, in front of Shannon) took the photo that got the most attention. A relative with a keen eye, however, has observed, on the basis of the location of the (driving direction) white arrow, that the “iconic” photo was taken later and from a different position, which reinforces the obvious–that it was a staged photo on behalf of a fake shooting.

That was never shown.  But you did see a picture out in a parking lot, which by the way if you take a long look at this picture of all these kids being led out, about 15 or 20 kids being led out by teachers and adults from this parking lot, if you take a look at the parking lot from the aerial views, you can see that there are different cars in the parking lot in that area.  So obviously that was done during some sort of drill.  That’s my opinion.  And it didn’t match with what was going on at the time.  So nothing is matching in real time for me.  That’s just another thing.

But where are the kids?  Where were the kids?  They weren’t present.  They just weren’t there. So that’s the kind of stuff that wasn’t worked out and, you know, they were doing things on the fly.  That’s why I say… I would say it was very amateur, very amateurish as to what was going on.